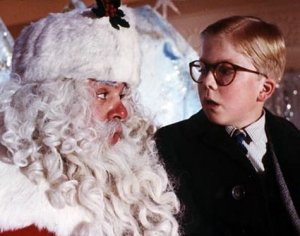 Festive string lights are going up all over town, Christmas trees are hanging off the roofs of cars and consumers are lining up ready to be hearded into various retail giants like sheep. Yes it’s safe to say that the Holiday season is officially in full swing. Normally I get turned off of all the post Thanksgiving holiday mayhem, however, one part of this season that is consistently a high point for me are holiday movies, particularly holiday comedies. Just as Thanksgiving marks the beginning of shopping nightmares or the eating of foods with words like nog and log, the television waves are chock full of holiday films of present and yesteryears. Some are good, others not so good (anyone know why the savvy individuals in the DVD industry decided we needed a reissued special “Family Fun” edition of Gov Schwarzenegger’s Jingle All the Way) but one thing is for sure, certain holiday films can be revisited and enjoyed year after year. The following is a short-list of some of my favorite holiday flick picks.

A Christmas Story—Okay so this one goes without saying. Maybe it’s the fact that I grew up watching this film and have seen it more times than I can remember but for me this is the best Christmas film out there. Where to begin: Ovaltine, the little orphan Annie’s secret decoder ring, the furnace fighter, the luminescent leg lamp, Skut Farkus’ red eyes and yellow teeth, the Chinese Christmas, and of course the Red Rider bee-bee gun. This is a classic that actually spawned a sequel, the lighthearted, “It Runs in the Family.” Please seek this movie out if you haven’t had the pleasure yet. Standout scene: the creepy department store Santa Claus and his posse of nasty elves..

The Ref—Released when Kevin Spacey was still a great character actor, this Holiday dark horse about a fast talking burglar (the always good Denis Leary) who takes a highly dysfunctional family hostage on Christmas eve is one of the most honest looks at the stress of the holidays on the modern marriage. The film is also a wonderfully scathing look at life in suburbia made long before CAmerican Beauty. Standout performance: Glynis Johns as one of the vilest mother in-laws ever brought home for the holidays.

Planes, Trains, and Automobiles—Remember when John Hughes was a master of the family and teen comedies of the great 80s? Remember how funny, charming, and warm the late great John Candy was? This may be one of the funniest films ever and is without a doubt the best comedy about the horrors of holiday travel. Set right before Thanksgiving, this odd couple story of a family man (Steve Martin) who partners up with a highly obnoxious shower curtain ring salesman (Candy) with hopes of getting home for the holidays by any means of transportation possible. Made long before Tommy Boy, a somewhat similar travel comedy, this situational comedy is a classic that has aged well. Standout performance: Character actor Dylan Baker’s brilliant bit role as Owen, the tobacco-chewing hillbilly who drives the duo to Wichita.

Home For the Holidays—Paired with the above mentioned, this is another classic Thanksgiving film that also shows the stress and horrors of large family gatherings. Directed by Jodie Foster (weird huh), this film is about how even in the most dysfunctional, chaotic reunions families can come together and embrace what they have. While this film is a dark comedy it is also a very mature and realistic look at what goes into dealing with a family and the love that is often overshadowed. Holly Hunter, Anne Bancroft and Claire Danes all shine still the one standout performance has to go to the always great Robert Downey Jr. who was apparently struggling with his addiction to drugs during the filming.

Scrooged—Richard Donner’s brilliant 80s comedy starring Bill Murray in his prime is a modern retelling of Dickens. While the film deals with greed and bah humbug Christmas spirit, it is the film’s portrayal of absurd commercialized televised Christmas specials that really makes this film a gem. Murray’s Frank Cross, a wretched network exec out to milk as much money from the holidays by commercializing/butchering Dickens’ classic Christmas Carol is priceless. Besides the extremely funny casting of spry gymnast Mary Lou Retton (remember her) as Tiny Tim, Cross’ Carol for the modern age is an intense big budget disaster with the tagline, “acid rain, drug addiction, international terrorism, freeway killers. Now more than ever it is important to remember the true meaning of Christmas. Don’t miss Charles Dickens’ immortal classic, Scrooge. You’re life just may depend on it.” The network also has a TV spot for Robert Goulet’s Old Style Cajun Christmas. Priceless. Standout performance: 80s comedy icon, Carol Kane as the Ghost of Christmas Present.

There you have it. All of these films are on DVD and most will no doubt be littering the cable networks during the upcoming weeks before Christmas.