When waking up on Christmas morning in a dank youth hostel in Kuala Lumpur, it’s easy to forget that it is in fact a much cherished Western holiday. This would be my first Christmas away from family and while this realization stung a bit more than Thanksgiving, which went by like any other day, I was buzzing from the natural high of being somewhere completely exotic.

Still, it being Christmas and all, Stuart and I had previously decided that a proper Christmas meal would be necessary.

Prior to arriving to KL we both researched various hotels and restaurants offering “traditional” Christmas brunches and settled on a pleasant enough spread to be held at the distinguished Carcosa Seri Negara hotel. We were to meet two of Stuart’s Japanese friends from Hong Kong (who were also visiting KL for the holidays) at one so we decided to start the morning off semi-early with the intention of perusing the Islamic Art Museum and National Mosque, both situated in the general area as the hotel.

The Kuala Lumpur Islamic Art Museum is a gorgeous building constructed around five ornately decorated domes. With a collection largely devoted to Islamic architecture, the building is one of the more beautiful museums I’ve visited. 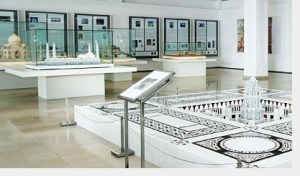 The first wing we entered was the Architecture Gallery which features an impressive collection of scaled down models of various mosques spanning the globe. Each was designed with such a precise attention to detail that viewing the models was a window into a truly remarkable side of this religion that I know so little about.

Each model was coupled with a description of its architectural style and a brief history of its construction. The room was organized by geographical region, and while the major mosques present–Masjid al-Haram at Mecca, India’s Taj Mahal and Turkey’s Blue Mosque–were impressive in their respective grandeur, the real gems of the collection were the lesser known exmamples.

I’ve written before of my interest in a number of the Central Asian countries, most notably Uzbekistan, so it wasn’t a surprise that the Central Asian section captured my attention right away. Equally exciting were examples from Southeast Asia, with the Indonesian and Malaysian styles being the most “untraditional” and an example of one from Southern China being the most downright curious, featuring the construction methods might expect in a Buddhist temple coupled with a Muslim architectural sense of space.

We took our time surveying the museum’s collection. The remaining rooms tended to blur together with a focuses on textiles, household artifacts, various styles of Quran binding, and ancient armory pieces, most notably a small cannon that was once attached to the sides of warring camels. A camel gun. Who knew!

We spent about two hours in the museum and eventually made our way to the hotel for what we had been preparing our grumbling stomachs for all morning.

The Carcosa Seri Negara hotel is a beautiful colonial style estate built in the hills around the Kuala Lumpur’s Lake Gardens, which is a wide jungle of a park featuring a butterfly habitat, wild bird sanctuary and an orchid and hibiscus garden. The hotel is owned and operated by the government and was once the residence of high-ranking British commissioners in then Malaya. We later found out that Christmas day was the last day of operation, as the hotel would close down indefinitely for repairs.

We arrived, accepted the glass of champagne that was offered to us by the waiter and surveyed the hotel’s long porch waiting for the girls to arrive.

Mickey and Jiggy are co-workers of Stuart’s in Hong Kong, working as Japanese teachers at his school. They were excited to be dining at such a beautiful hotel and though I was left out of some of the Japanese conversations that commenced, they were very sociable.

The Christmas spread consisted of the usual fare: roast lamb with mint jelly, an impressive salad and appetizer bar with a focus on marine life, stuffed chicken and polenta, fine cheese, and a colorful dessert selection that was alluring enough to make us rethink the fact that by the end of the main meal we were clearly stuffed.

The added expense option for free flowing wine was only debated briefly with the go-to excuse of, “what the hell, it’s Christmas,” taking over. Needless to say we left the hotel fatter and more inebriated than when we had arrived.

After the three and a half hour gorging we followed the girls back to the art museum and said our farewells and I coaxed Stuart into trudging along with me to the Kuala Lumpur Bird Park, written up everywhere as “The World’s Largest Free-flight Walk-in Aviary,” which is a mouthful of an endorsement.

Outside of the entrance I was pleasantly surprised to find a family of greedy tree monkeys scrounging through the public trash receptacles. These filthy buggers had no respect for the park’s otherwise serene beauty and took to throwing their rejected finds on the ground, with not a single flinch from the movement of the spectators (myself included) inching closer with cameras ready for something mischievous to capture.

While I secretly prayed for one monkey to go bezerk and attack a woman’s purse or lunge at some poor spectator’s ear, the monkeys just carried on with their tasks at hand. “How bout that man over there with the video camera,” I thought. “He’s just screaming to be made an example of. Or the unassuming child with the ice-cream cone, you could easily take her treat for yourself.”

The Walk-in Aviary turned out to be the kind of over-priced park one might expect at Disney World, rather than the wicked place to have birds fly around your heads place I imagined. With the red wine taking its toll and some menacing storm clouds soiling the morning’s beautiful blue skies, we made an executive decision to head back towards our hostel for a much-needed late afternoon siesta before heading out into the city in the evening.

We walked down the hill back towards the museum where we had left Mickey and Jiggy and encountered a Romanian tourist who had just left the sanctuary. She was traveling in KL solo and was also headed back to her hotel for a little rest before heading back out into the city. She told us that many Romanians travel to Southeast Asia, taking advantage of the cheap-airfare and more importantly, cheap exchange rate. She complained, however, that taxi drivers in KL had been taking advantage of the fact that she was a foreigner and looked instantly put-off when we saw her get into a cab outside of the museum.

After a two hour siesta of sorts back at the hostel where I read up on some possible sights for the next day, we made our way towards Petronas Towers to soak up the night lights and possibly find a bar for a drink.

Even though I had seen the towers on my first night in KL, they were equally as stunning. We sat for a while in the crowded fountain park on the backside of the towers looking up at a number of the surrounding hotels and buildings, wondering what their views were like and if any of them had sky bars.

Two days before I left for KL the New York Times travel section had printed one if its, “36 Hours in___________” stories on Kuala Lumpur, naming The Trader’s Hotel SkyBar as the best place to soak in the “silver, scalloped buildings light up at night.” After a while we meandered through the towers’ exterior park towards the hotel and quickly found ourselves sipping cocktails with the towers glistening in the background.

Eventually we headed back to the hostel, opting to walk the distance, in lieu of the monorail, seeing as the towers were practically in the backyard of the previous night’s market. Our plan was to cap the evening with yet another hookah.

The night market was bustling as always and once again the large projector screen was flashing Hollywood Christmas flicks to a fairly indifferent crowd.

After taking our time with a melon flavored nargila, we made our way back to the hostel with the intention of calling our family as they celebrated Christmas morning.

In my typical controlling fashion I had taken on the role of navigating the city during this trip, and I knew the hostel’s surrounding area very well. This said, my suggestion to cut through the Chow Kit Wet Market after dark was not one of my finest moments.

“Trust me, if we cut through here it’ll take us right to the front door, saving us the trip around the block to the monorail station,” I told Stuart.

The market route did in fact take us right to the hostel entrance as I had promise but the market, which in the morning was alive with the sounds of commerce, was empty at night, save of course for the hoards of giant Malaysian rats feeding on the day’s scraps.

The market stretched a lot deeper in than I had anticipated going in and street lights quickly faded leaving us to transverse through a dark and damp series of narrow walkways with bits of fruit and meat being feasted on below our feet. That this was the first and only time during the trip I had worn sandals out made the experience that much more hair raising. Way to go.

After making it a third of the way in before truly realizing the vermin situation underfoot, we decided that it would best to just run the remainder of the stretch with the intention of scaring away whatever might be chewing away in our path. While I can’t be sure of what I was feeling around me, it’s safe to say I startled a number of rats, many of which were no doubt drunk on rotting fruit, and am sure a tail or two brushed up against the exposed flesh of my naked feet. Remember that scene in “Indiana Jones and the Last Crusade” when Indy and a busty Fräulein head into the Venice sewers surrounded by rats, well this wasn’t that far off in terms of moments to make you squirm.

Back at the hostel I called home via Skype and caught my family in the middle of Christmas morning. While it felt weird and bit sad that while my family sipped mimosas and carried out our traditional Christmas morning tradition of poached eggs and a candied holiday-themed coffeecake, I had just sucked down a fruit cocktail-flavored hookah amongst a group of muslim youths, and had just fled through an alley overrun by scurrying rats, I was pleased that this one Christmas would undoubtedly be one to remember forever.