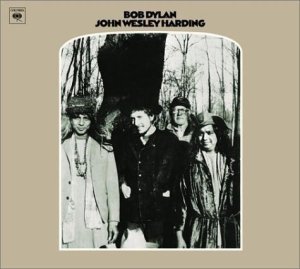 After a life changing motorcycle accident and a series of underground recordings with The Band, Dylan went to work on his follow up to the rock world altering, Blonde On Blonde. Seven albums into what was already a prolific recording career, and 18 months since the bombshell release of Blonde, it’s safe to say expectations for Dylan were high.

The motorcycle mishap and sudden rush of fame had left Dylan jaded with his notoriety. He was tired of his constant need to appease the masses–critics especially–and his “voice of the people” label was more of a burden than a luxury. He was tired of being in the spotlight. Tired of the constant nagging of fans, many of which would take pilgrimages to his home in upstate New York. He had a family to be with and the desire to be nothing more than a musician and songwriter.

Taking into account the work on The Basement Tapes (which it should be noted were recorded months prior to the work on John Wesley Harding but was not “officially” released until the mid 1970s) and his newfound outlook on life, it comes as no surprise that Harding is more stripped down and less stylistic than its überhit predecessor.

For fans still grinding their teeth over Dylan’s electric period, John Wesley Harding must have also been a pleasant return to the simpler days of Dylan, his guitar, and his poetry. While folkier on the surface, the music on this album is equally as complex as the electric predecessor. The energy, however, is restrained.

The record kicks off with its title track, a story-ballad recalling the tale of real-life outlaw John Wesley Hardin. The instrumentation is sparse with a focus on Dylan’s harmonica while Dylan’s croons through the fairly straightforward lyrics. In many ways the song is a return to the Americana country folk of his early years, absent, however, of the blatant protest lyrics.

“As I Went Out One Morning” features one of the most memorable, albeit simple bass lines in rock and roll–a rubber band twang courtesy of one Charlie McCoy, who previously lent his guitar talents to “Desolation Row.” The song itself follows suit by weaving a tale from history, possibly referencing Tom Paine, an 18th century American revolutionary. When Dylan/narrator opens by singing, “to breath the air around Tom Paine’s” the metaphor could be a slight reference to political protest however many of deemed this song (and subsequently this album) an allegory for Christianity. The story of a damsel in chains wanting to escape and the narrator seeing danger (possibly the temptation of sin) only to be saved by Paine, the song’s savior like figure.

The trio of songs that follow–“I Dreamed I Saw St. Augustine,” “All Along the Watchtower,” and “The Ballad of Frankie Lee and Judas Priest”–are openly pious with references to biblical figures (Bishop St. Augustine who fell to an angry mob), temptations (Judas Priest) and possibly in “Watchtower,” the Tower of Babylon and the city’s demise.

“Watchtower” is undoubtedly John Wesley Harding’s most significant song, one that has been immortalized through countless covers, and continues to leave interpreters puzzled to its meaning. Some believe it references modern day musicians struggling with fame (Dylan being the Joker character needing to break away from the spotlight), others believe it to be a precursor to Dylan’s eventual converting from Judaism to Christianity in the mid-70s, as seen in his born-again period.

What’s most striking about the “Watchtower” of this album is how understated the song is compared to the roaring live anthem renditions that others, including Dylan, would flesh out further down the road. That the true songwriting origins of the song are still up for debate only adds to the song’s allure and easily warrant an entire column based on the song’s controversy.

John Wesley Harding’s second half is truly Dylan’s first foray into country music. There is a notably voice change on tracks like “Drifter’s Escape” and “Dear Landlord,” and the steel guitar notes on the album’s closers, “Down Along the Cover” and “I’ll Be Your Baby Tonight” are in-the-moment reflections of the Nashville setting, a sound that would come full circle on the radical departure of Nashville Skyline.

Musically speaking, “The Wicked Messenger” is the album’s stand out track, a fiery blues number that is a lot more complex than it appears. From the piercing harmonica trills to the falling guitar licks and jagged rhythm, the song is the one moment on the album in which Dylan truly lets loose. The song snuck into Dylan’s live sets in recent years taking on a new, more timely fierce blues incarnation that perfectly compliments his touring band of recent.

If “The Wicked Messenger” is John Wesley Harding’s understated masterpiece, the aforementioned “I’ll Be Your Baby Tonight” may the one track on the record that is most out of place. Dylan has said that the album’s two closers were the only full songs written and imagined in Nashville. While musically “Baby Tonight” exudes all the sounds of Dylan’s new stomping grounds, it’s blatantly romantic lyrics would have been more welcomed on say Another Side of Bob Dylan. Ultimately the song feels like an after thought tacked onto the album at last minute. The fact that UB40 would later release a cover single of the song doesn’t bode well for its standings in Dylan’s oeuvre.

John Wesley Harding may be one of Dylan’s most underappreciated albums to date. The average Joe is familiar with the immortal “All Along the Watchtower,” however it’s safe to say most people, light “Greatest Hits” Dylan fans included, couldn’t tell you the album the song resides on, or any of the Harding’s other memorable moments.

What’s striking is that besides the notoriety of the album’s surprise hit, this is an unexpected and ambitious offering from Dylan during a time when the artist could have very well attempted to blow listeners away, yet again. Unlike his contemporaries at the time who were experimenting with psychedelia (The Beatles unleashed Sgt. Peppers) and budding art rock (Pink Floyd released Piper At The Gates Of Dawn), Dylan once again chose to go back to his roots, while also exploring historical and non-secular motifs throughout his lyrics. It’s classic Dylan without the grandiosity of his prior ascent to mega-stardom. Simply put the album is a concise collection of stripped down country folk songs that paved the way for future musical transformations, some welcomed, others not so much.

Essential Tracks: “As I Went Out One Morning,” “All Along the Watchtower,” “Drifter’s Escape,” “The Wicked Messenger”